LPG or Liquefied petroleum gas is not only used for cooking or powering certain household appliances, it can also be used for powering cars as well as stationary application like a generator. In fact, a lot of motorists in Europe and other parts of the world are driving their vehicles with autogas. Its use as a source of fuel for vehicles dated back in the 1940s and since then it is gradually growing in population. It is said to be the third most commonly used fuel for powering vehicles across the globe. Out of 600 million passenger cars, about 25 million are powered with autogas. This figure represents 3% of the entire number of vehicles driven with LPG.

Besides the economic benefit of autogas, the gas is also eco-friendly. It is being utilized as green fuel because it reduces exhaust emissions. One of the problems facing the world today is the problem of global warming which is caused by greenhouse gases emitted into the atmosphere in large quantity. These gases eat up the ozone layer that protects the earth from the direct rays from the sun. The exhaust emission from vehicles driven with petrol and diesel are one of the major sources of the greenhouse gas. Driving with autogas helps to solve the problem to a greater extent because it brings down CO2 emission by 15% in comparison to petrol.

+ LPG is non-toxic, non-corrosive and free of any additives, has a high octane rating, and burns more cleanly than petrol.

- LPG has a lower energy density than petrol, so the equivalent fuel consumption is higher. 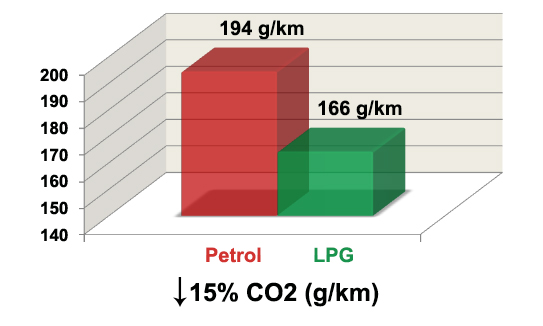 The Evolution of LPG Systems

The very first LPG conversion systems were designed in Italy in late 1930s with the aim of substituting petrol with lpg, when petrol supply was strictly limited. Their core principles are still used today in some type of cars, specifically those with carbureted engines.

The introduction of the catalyst in the exhaust system forced the first considerable change in petrol systems. The carburetor had become obsolete and was replaced by single and multipoint injection systems, equipped with lambda sensors. The latter allowed for air-fuel mixture composition to be more precisely monitored, which in turn assures catalyst effectivity in terms of lowering harmful compounds content in exhaust fumes. As a result, LPG systems had become more electronically-governed and more precise in terms of fuel distribution. The general idea for operation did not change, however, and was still based around the original Italian concept.

Introducing stricter emission standards caused widespread introduction of on-board diagnostics systems (EOBD), responsible for monitoring combustion process quality. Autogas systems had to further evolve so that gaseous fuel could be more precisely portioned, this is how constant and sequential gaseous-state LPG injection systems came about. The latter ones have become standard nowadays and are the most common solution for modern-day engines.

Looking at the evolution of LPG propulsion systems allows to categorize them in terms of technological advancement. Generally, there are five generations of autogas systems:

This is the most basic and simplest autogas system that is suitable to install on the carburetor or single point fuel injection engines without catalytic converter or oxygen sensor. This system is still in use today in some parts of the world since its first inception in late 1930s. Like almost all vapor phase systems, it uses a converter to vaporize the liquid fuel coming from the tank, which is then fed to the mixer in the intake at a regulated / reduced pressure. There the airflow through the mixer automatically meters the flow of gas roughly achieving an approximate air-fuel ratio.

This type of system is basically the same as the 1st Generation system but is controlled by an electronic controller that takes its readings from the oxygen sensor in the exhaust, the TPS (Throttle Position Sensor) and RPM, in this way the optimal air/fuel mixture is obtained. This system is suitable for single or multi point fuel injected engines with catalytic converter.

risk of backfire in the air intake system,

problems with running in the cold season,

This system is used on single or multi point fuel injection engines with lambda sensor and catalyst. Unlike the 1st and 2nd Generation systems, the gas is fed into individual lines of the intake manifold, near the valves. Even though fuel is fed into the engine constantly, air-fuel mixture is much better distributed among all cylinders than in previous generations. Fuel portions are electronically regulated and the system uses signals from engine's sensors (oxygen sensor, RPM and TPS) to calculate optimal mixture composition, which is necessary for the catalyst to work properly. Thanks to the elimination of the mixer in comparison to previous generations, the engine performance is improved, while at the same time gas consumption is reduced. Fuel is fed more precisely and the phenomenon of backfire is virtually eliminated since the gas is injected at the end of the intake system. Due to quite high cost of this system, and as the 4th Generation system started to become popular, the demand for 3rd Generation system fell sharply, consequently disappeared from the market.

This is the most popular autogas system on the market today, it is known as multi point sequential fuel injection system. The system still relies on a regulator to vaporize the gas like the old systems, but the injection takes place via a series of electrically controlled injectors. This allows more accurate metering of fuel to the engine than it was possible with previous generations. As a result, the fuel economy, power and emissions are much improved. The injector opening times are controlled by the original petrol control unit, which the gas ECU then translate into the correct values, taking into account the different fuel behavior and injector construction. The 4th Generation system can be used on direct (TSI, TFSI, GDI etc..) or indirect sequential injection cars, and it is compatible to ecological requirements of EURO-3, EURO-4 and EURO-5 and to onboard diagnostic systems of OBD II, OBD III and EOBD.

This system no longer needs a reducer, because unlike in all the previous generations, the gas is fed into the engine in its liquid form in much the same manner as a petrol-injection system. As in 4th generation, LPG enters the intake system at the very end, near the intake valves. The liquid gas vaporizes in the stream of air flowing towards combustion chambers, thus cooling the charge and boosting volumetric efficiency, which results in performance improvement in certain rpm ranges. 5th Generation system is operated and controlled like its predecessor, and uses petrol injector control signals. This system achieves a better fuel economy and power as well as lower emission than vapour systems.

Evidently, the changes that the engines have undergone in years due to the pressure from emission standards equally influenced the autogas technology. Works are still in progress and new systems are being developed, including those for petrol engines with direct fuel injection (also direct liquid LPG injection) and for Diesel engines (dual fuel systems mixing diesel and autogas to reduce running costs and harmful emissions). All those new applications are based around 4th and 5th generation systems, as they can be easily adapted to new working conditions just by introduction of software modifications.